Significant copper and molybdenum intersections include:

Pierre Léveillé, President & CEO of Deep-South stated that: "We continue to have success with our active drill program identifiying thick, higher-grade zones. We are consistantly intercepting significantly higher grades than the average grade of our  NI 43-101 indicated resource that stands at 0.31%Cu. The higher-grade zone in Pit 2 extends significantly further west and at depth than previously demonstrated. It’s increasingly apparent that the use of vertical drilling in the past missed many of the near vertical structures contained within the broader mineralization of the project.  Those near vertical structures so far are proving to be associated with a higher grade of copper than contained within the current resource.  Additionally, the presence of molybdenum has been confirmed with high Mo grades obtained in association with structures and alterations”

These 3 holes for which assay results have been received cover some 684.11 metres and were drilled on the central mineralised portion of the deposit to better delineate the extension of this zone to other mineralised areas located to the northwest and southwest. The holes have successfully encountered intercepts of mineralization from bedrock or near bedrock surface. Assay results for the holes are tabulated below: 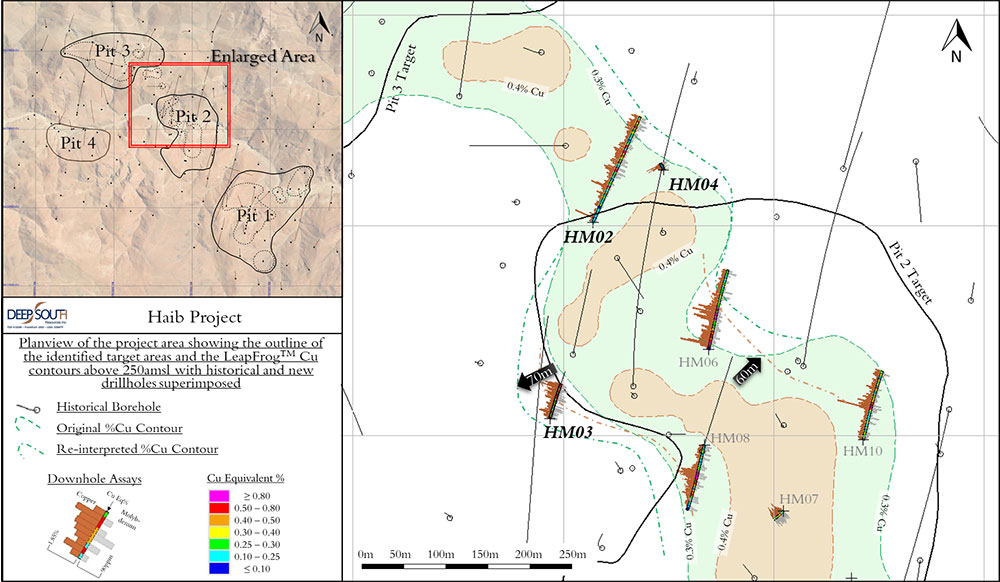 From Figure 1 it can be seen that all 3 holes were located in the Pit 2 target with HM03 testing the westward extension of the higher-grade portions and HM02 and HM04 the extension of the same northwestwards towards the Pit 3 target. These drillholes have significantly widened (up to 70m) the 0.3% and 0.4% Cu pit shells within the top 250m of the resource.

Located on a north-south section line on the western edge of the Pit2 target (Figure 2), HM03 was positioned to test the westward extension of the higher-grade portion of this target while HM02 tested the extension towards Pit 3 to the northeast.

HM03 encountered good grades almost from surface, which continued for over 156m to the end of the hole. HM02 shows that the higher-grade zone in Pit 2 extends significantly further west than previously demonstrated as well as with depth.  Mo grades are highly variable from a low of 0.001% to a high of 0.149%, but averaging 0.014% over the full length.

Results from HM02 show that although the 0.3% Cu contour extends unbroken between Pit 2 and Pit 3, the 0.4% Cu contour does not.  Additionally, the 0.3% contour extends some 40m further towards the northeast than demonstrated previously, as well as with depth.  Mo grades are muted for most of the hole (mean of 0.006%) with two intervals returning Mo grades of over 0.05%. 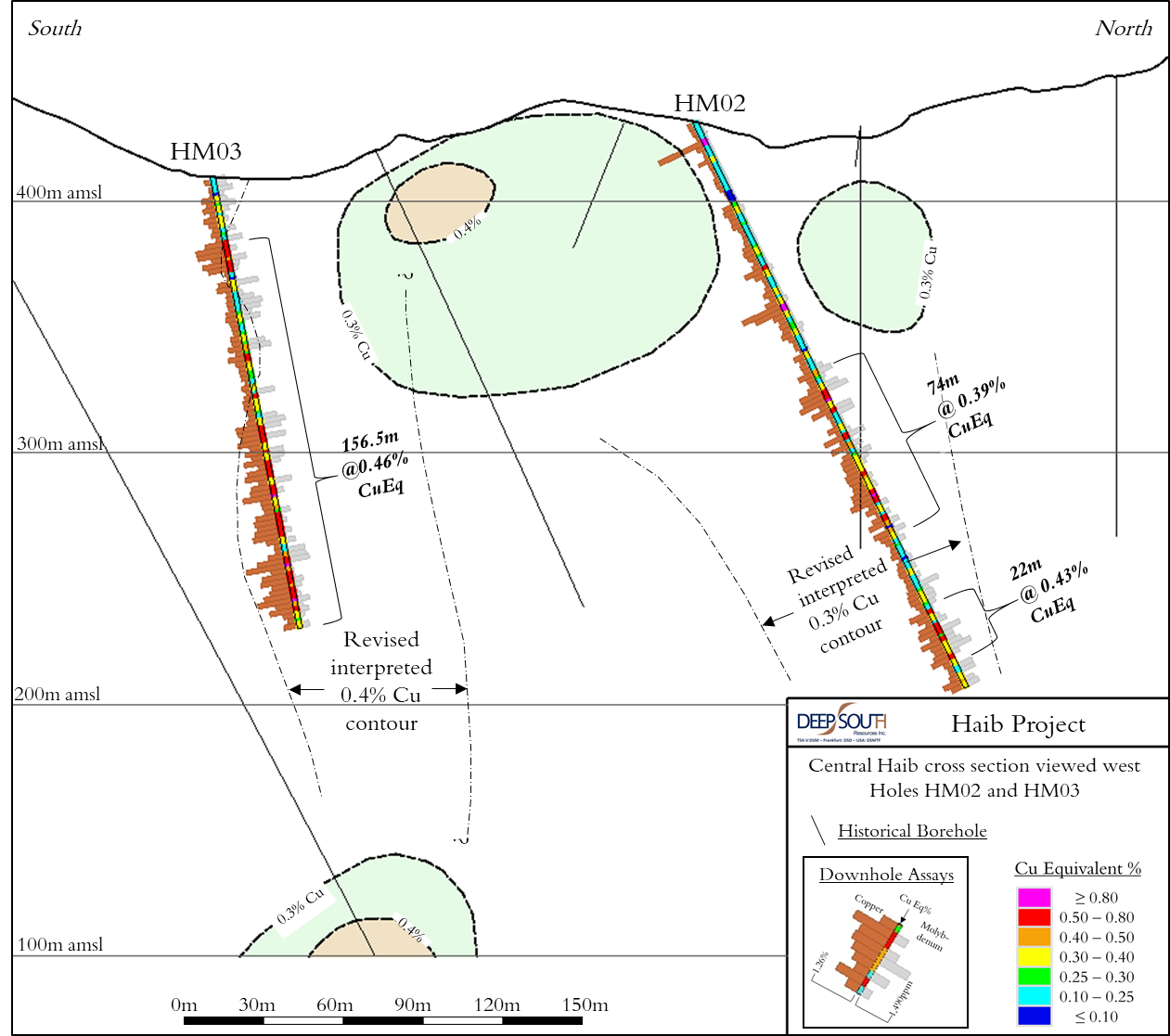 Figure 1:  Vertical section looking west showing results for HM02 and HM03.  The outlines of the 0.3% and 0.4% Cu contours previously derived from LeapFrogTM are shown.

Also drilled on the Pit2 target, HM04 was planned to test the extension of the 0.4% contour northwards as well as the continuity of the contour between Pit 2 and Pit 3 (Figure 3).  Results were very similar to HM02 demonstrating that (1) the 0.4% Cu contour is broken between Pit 2 and Pit 3; (2) the limit of the 0.3% Cu contour is significantly larger than previously demonstrated; and (3) the 0.3% Cu contour is continuous with depth.  Significant Mo grades are almost entirely absent with the hole and had a mean Mo grade of 0.003% for its full length. 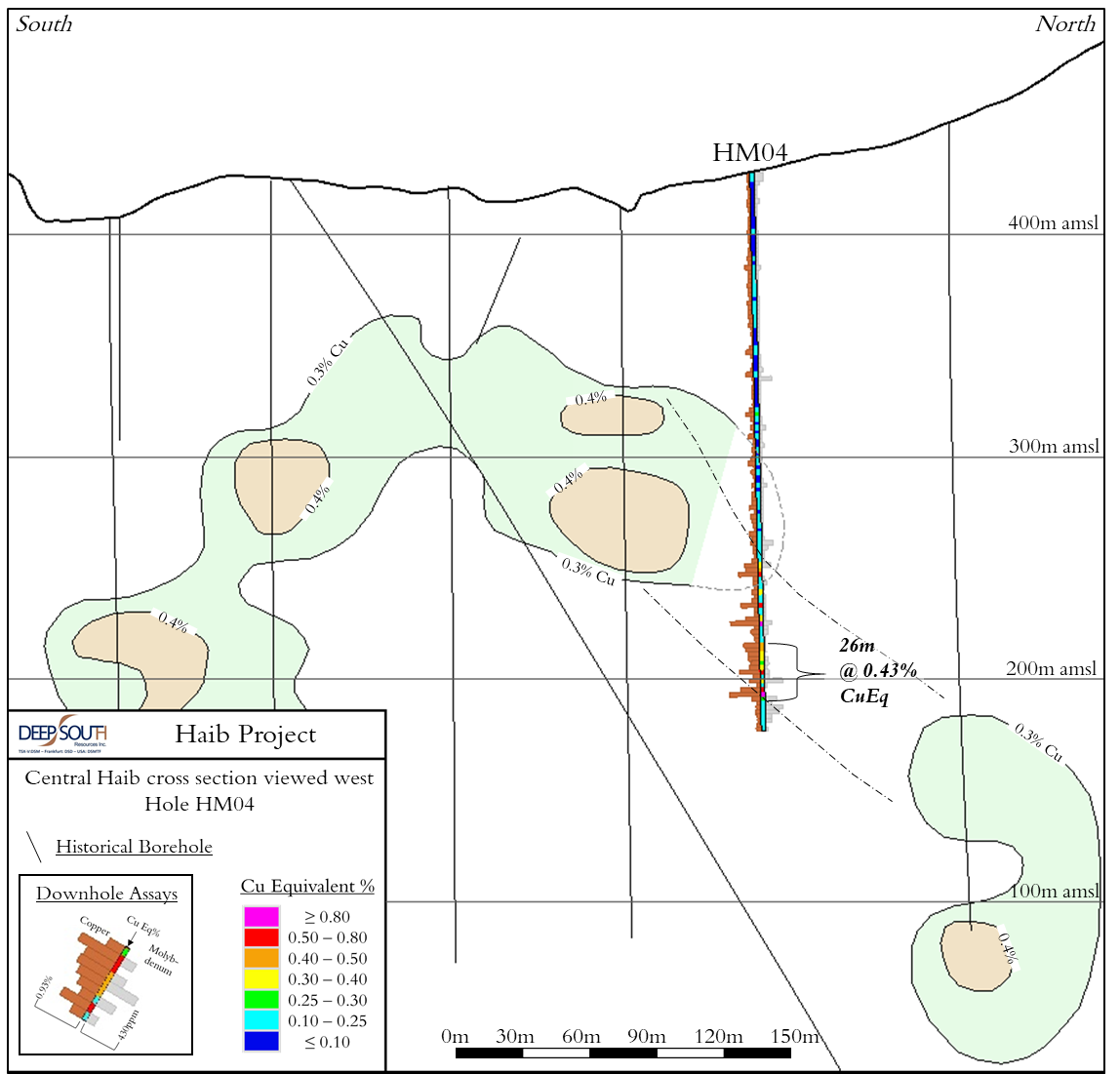 Figure 2:  Vertical section looking west showing results for HM02.  The outlines of the 0.3% and 0.4% Cu contours previously derived from LeapFrogTM are shown.

Three drill rigs are active on the property. 19 holes have been completed and two holes are currently in progress. Results for eight holes have been received and released. A further eleven holes have been completed, processed, and submitted to the lab for assay with results pending. The program is planned for 10,000 metres, of which 40% has been completed to date. The Haib Copper Deposit is one of the oldest porphyry deposits in the world at 1.8 billion years old (archean). Over time, it has seen several transformations resulting in shearing and faulting events. Those events have concentrated the mineralization along the shears and faults.

The specific focus of this drilling campaign is to further delineate and grow the higher-grade zone(s) of the Haib deposit uncovered by Deep-South in 2019 with the ultimate goal of establishing a measured resource over that higher-grade section of the deposit. The Company also plans to drill a number of holes to depths greater than 350 meters to test the vertical extent of the deposit.

The MSA Group of South Africa has been appointed to provide an updated NI 43-101 resource estimation after the drilling program completion.

All drill cores are logged, photographed, and cut in half with a diamond saw. Half of the cores are bagged and sent to ALS Laboratories Ltd. in Johannesburg, South Africa for analysis (SANAS Accredited Testing Laboratory, No. T0387), while the other half is quartered with one quarter archived and stored on site for verification and reference purposes while the other quarter will be used for metallurgical test work. 33 elements are analyzed by Induced Coupled Plasma (ICP) utilizing a 4-acid digestion and gold is assayed using a 30g fire assay method. Duplicate samples, blanks, and certified standards are included with every batch and are actively used to ensure proper quality assurance and quality control.

About the Haib Copper deposit

Please note that: Mineral Resources that are not mineral reserves do not have demonstrated economic viability. Mineral resource estimates do not account for mineability, selectivity, mining loss and dilution. These mineral resource estimates are based on Indicated Mineral Resources that are considered too speculative geologically to have the economic considerations applied to them that would enable them to be categorized as mineral reserves. However, there is no certainty that these indicated mineral resources will be converted to measured categories through further drilling, or into mineral reserves, once economic considerations are applied. There is no certainty that the preliminary economic assessment will be realized.

Mr. Dean Richards Pr.Sci.Nat. , MGSSA – BSc. (Hons.) Geology, is the Qualified Person for the Haib Project as defined by National Instrument 43-101 and has approved the technical disclosure contained in this news release.

Deep-South Resources is a mineral exploration and development company. Deep-South holds 100% of the Haib Copper deposit in the south of Namibia. Haib is one of the largest undeveloped copper deposits in Africa.

Deep-South growth strategy is to focus on the exploration and development of quality assets in significant mineralized trends and close to infrastructures in stable countries. In using and assessing environmental friendly technologies in the development of its copper project, Deep-South embraces the green revolution.

This press release contains certain "forward-looking statements," as identified in Deep- South’s periodic filings with Canadian Securities Regulators that involve a number of risks and uncertainties.

There can be no assurance that such statementsl prove to be accurate and actual results and future events could differ materially from those anticipated in such statements.

This News Release contains forward-looking statements, which relate to future events. In some cases, you can identify forward-looking statements by terminology such as "will", "may", "should", "expects", "plans", or "anticipates" or the negative of these terms or other comparable terminology. All statements included herein, other than statements of historical fact, are forward looking statements, including but not limited to the Company’s plans regarding the Haib Copper project. These statements are only predictions and involve known and unknown risks, uncertainties and other factors that may cause the Company’s actual results, level of activity, performance or achievements to be materially different from any future results, levels of activity, performance, or achievements expressed or implied by these forward-looking-statements. Such uncertainties and risks may include, among others, actual results of the Company's exploration activities being different than those expected by management, delays in obtaining or failure to obtain required government or other regulatory approvals or financing, inability to procure equipment and supplies in sufficient quantities and on a timely basis, equipment breakdown and bad weather. While these forward-looking statements, and any assumptions upon which they are based, are made in good faith and reflect the Company's current judgment regarding the direction of its business, actual results will almost always vary, sometimes materially, from any estimates, predictions, projections, assumptions or other future performance suggestions herein. Except as required by applicable law, the Company does not intend to update any forward-looking statements to conform these statements to actual results.