Vancouver, B.C., Canada - DECEMBER 18, 2017 - Deep-South Resources Inc. (" Deep-South " or " the Company ") (TSX-V: DSM) is pleased to announce that it has signed a letter of agreement (the "Letter of Agreement") to acquire from Sparrowhawk Gold Ltd ( "Sparrowhawk" ), 90% of the St John project, neighboring the Kokoya gold mine situated in the northeast of Liberia. 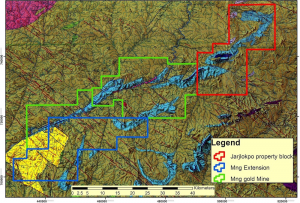 Upon completion of a satisfactory due diligence, Deep-South shall acquire 90% of the common shares of Jarjlokpo Resources Ltd, which holds the Reconnaissance Licence forming the St John project, in consideration for a cash payment of US $ 20,000.00 and the issuance of 250,000 common shares of Deep-South.

Furthermore, Deep-South shall incur the following payments and shares issuance to Sparrowhawk:

Deep-South shall also incur the conditional following shares issuance and payments to Sparrowhawk:

Sparrowhawk shall be entitled to a production bonus of US $ 1million to be paid 60 days after the day of commercial production commencement;

Sparrowhawk shall be entitled to hold a 1.5% Net Smelter Returns royalty ("NSR") calculated on 100% of production from the Property (the "NSR"). Deep-South shall hold an option to buy back 1/2 of the NSR by making a cash payment of $500,000 to Sparrowhawk at any time

Mr. John Akwenye, Chairman of Deep-South stated, "We are delighted with this transaction. We are securing a large area in the heart of a promising area that already host a large gold mine and several discoveries. St John has substantial exploration potential. St John is a quality asset that adds strong value for our shareholders."

The St John project is situated within Archean Greenstone Belt terrain of North Liberia. The project comprises one Reconnaissance license covering an area of 480.4 square kilometres located some 20 kilometres North East along trend from MNG Gold's Kokoya gold mine (see attached map). The project area covers 45 km strike of a major greenstone belt at close proximity to the St John shear zone. The project also hosts an important number of active artisanal miners through the license.

Liberia is significantly underexplored compared to the rest of West Africa hosting the same geology. The country hosts a wide distribution of active alluvial artisanal mining, which suggests the potential for primary bedrock gold deposits. The discoveries of the New Liberty mine, Kokoya Gold Mine and the Dugbe deposit have revealed the potential and prospectivity of the country.

Clifford Fitzhenry; MSc, BSc (Hons), Pr.Sci.Nat., is responsible for the technical part of this press release and is the designated Qualified Person under the terms of National Instrument 43-101.

Addition to our technical team

Mr. Lemmon is a professional Geologist with experience in numerous jurisdictions worldwide. Most notably, he has over 25 years experience in several African countries such as Liberia, Zambia and many others.

In addition to having held directorship positions at a number of public and private companies, Mr. Lemmon is Chief Geologist and Director of Copperzone Resources Ltd, a successful project generator and exploration company focused in Zambia. Mr. Lemmon is a Professional Graduate of United Kingdom's Institute of Materials, a Fellow of the Geological Society of London, and a Registered Professional Natural Scientist in South Africa.

Mr.Pierre Leveille, President & CEO of Deep-South stated that: "We are extremely pleased to have the opportunity to bring Mr. Lemmon and Fitzhenry on board with us. They bring highly valuable African experience that will highly benefit to Deep-South."

About the INAL project acquisition in Mauritania

The closing of the INAL project acquisition is pending the issuance of the formal Ministerial decree officially granting the two exploration licences comprised in the INAL project. The Ministry of Mines has confirmed that the owner of the project, has filed all the requisite forms and made all the requisite payments for the licenses and that they have obtained priority over the licenses. Deep-South's due diligence was satisfying and the Company intends to close the acquisition upon reception of the formal Ministerial decree.

Details of the transaction have been previously disclosed in a press release dated August 23, 2017.

This press release contains certain "forward-looking statements," as identified in Deep-South's periodic filings with Canadian Securities Regulators that involve a number of risks and uncertainties. There can be no assurance that such statements will prove to be accurate and actual results and future events could differ materially from those anticipated in such statements. Neither the TSX Venture Exchange nor its Regulation Services Provider (as that term is defined in the policies of the TSX Venture Exchange) accepts responsibility for the adequacy or accuracy of this release.

More information is available by contacting Paradox Public Relations at

2022-07-27
Deep-South board of directors will start the search to replace the late Mr. John Akwenye as Chairman. In the mean time the board has nominated Jean-Luc Roy as acting Chairman